Alexander Langlands is a working archaeologist who has spent the last few decades relearning, and in some cases recreating the old handicrafts that sustained traditional farming societies in England and beyond for centuries, even millenia. Some of these are extraordinarily complex, like traditional leather making, which eventually evolved into a year-long process of soaking and treating to achieve the highly durable product that was necessary to manage horses and even run the machines of the Industrial Revolution. (The old offset printing press in my Dad’s shop in the ‘fifties was still propelled by a stout leather belt.)

Some of the most ancient crafts leave one wondering at their invention. The production of lime, essential to hardening plaster and cement, goes back eight or nine thousand years. It requires temperatures on the order of two to three thousand degrees and produces a highly unstable substance, quicklime, capable of enough injury to a human being that it was once used as a weapon. To stabilize it and make it useful, it is “slaked” or dumped into water, producing tremendous heat. But then it can be used to harden clays and cements and waterproof floors and walls. (The same lime, in very dilute form, is used in preparing corn for tortillas and in pickling, where it has the effect of enhancing the processed foods. Again the question, how did ancient cultures discover these sophisticated uses of a chemical whose production is so difficult?)

But even the simpler crafts that Langlands describes turn out to require a level of experience and intelligence that their simplicity belies. Hedgerows, popularized in contemporary sustainable agriculture circles, were designed to keep in stock and keep out larger wildlife. Not just a string of flowering plants, they were (and are in England today) tangles of useful trees and shrubs carefully “layed” every few years to encourage rooting and prompt new shoots in order to maintain the barrier and the health of the hedge. Dry stone field walls (“dry” because built without mortar) are carefully built according to both general principles and the particular characteristics of the type of stone at hand. Langlands found variation throughout the UK.

This characteristic of traditional handicrafts — its dependence on learned technique and intelligent application — lies behind Langlands’ use of the Old English word “cræft” in his title. In the oldest texts cræft referred not simply to skill but to the power that that skill delivered. “Crafty” recognizes the agile intelligence of true cræft. This is a far cry from the habby-time crafts exploited by our “crafts stores” and eve, to some extent, from the aesthetic preoccupations of the Arts and Crafts Movement, though that movement, both in England and here in the United States, contributed a great deal to the revival of old skills and the elevation of “craftsmanship” over the machine-made goods that fill our lives.

It’s not that modern occupations do not share elements of cræft. Computer programming and graphic design — to name just two — require attention to detail, careful pacing of steps combined with experimentation, and an acquired intuitive grasp of the “materials” at hand and how they might best fit together. What these occupations lack that traditional crafts all have is direct, tactile engagement with materials that are part of the natural world. This is the appeal of what we think of as crafts, as it is of so-called primitive skills embodied in Tom Brown’s tracking school or the primitive skills fairs that dot the country.

Remarking on the dominance of computers in our lives, Langlands begins “to wonder whether the vast complexity and infinite interactions digital technology promises are in fact doing quite the opposite [of what they promise]: are they actually narrowing our sensory experiences?” And he goes on to observe that “our physical movements have been almost entirely removed as a factor in our own existence.” Even the hand tools we continue to use may be implicated in some serious losses. “Mechanization…, and especially the small electrical motor, has largely robbed us of the need to be physically skillful and dextrous.”

Thus, what traditional crafts have to offer are not just alternatives for making and living as the dream of abundant, cheap energy fades. They offer possibilities of learned skills and individual power that are hard to come by in a world in which everything we use is bought. They offer as well a re-connection to the natural world that we crave and that we will need to restore the health of the world and of ourselves.

This is where too much environmentalism fails us as badly as a world view as does its techno-scientistic enemy. For to become master or mistress of a craft is not to become master or mistress of nature but her humble partner. And that partnership, not a withdrawal to the spectator status of leave-no-trace wilderness sojourn, is the real basis for a healthy relationship with nature, including our own human nature.

The traditional crafts, Langlands writes, were all integral to the needs of the farming household, and before that to a way of life based on hunting, gathering, and tending the wild, in Kat Anderson’s felicitous phrase. There are still teachers of these crafts, still resources for learning them, and once again an urgency, cultural as well as economic, to reacquire the ability to fashion the things we need out of the materials that nature provides ready to hand. 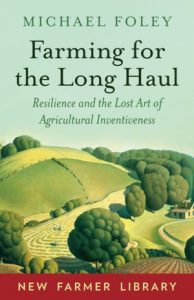